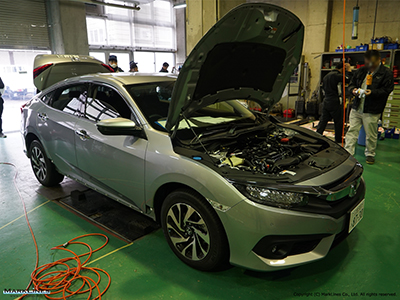 The all-new Civic launched in September 2017 is a great Honda car, making its comeback for the first time in seven years. The platform was newly developed specifically for the new Civic which is aimed at the top class in the C-Segment.

According to Honda reports, all models are equipped as standard with its most advanced driver-assistance safety system, Honda SENSING, that coordinates braking and steering control technologies through recognition of the driving situation in front of the vehicle using safety-related technologies such as millimeter-wave radar and a monocular camera. This report focuses on explaining the electronic components used for functional safety features equipped on the Civic to better understand Honda’s latest ADAS system.

Currently, Israel-based Mobileye has a significant presence in the field of image recognition technology using monocular cameras. On the other hand, automakers such as Toyota and Honda have developed their own technologies, Toyota Safety Sense and Honda Sensing, in collaboration with component suppliers. Prior to 2017, the camera used for Honda SENSING was from Nidec Elesys Corp., however the Bosch monocular camera has been adopted for the 2017MY Civic and N-BOX full model change models. Also, the millimeter-wave radar previously sourced from Fujitsu Ten (now Denso Ten) has been replaced by the Bosch system.

During lane detection with the monocular camera, when the system forecasts a collision with a pedestrian as a result of the vehicle departing from the lane toward the side strip of the lane, the system automatically engages the steering to avoid a collision accident.

ACC is a function to adapt the speed of the vehicle with the vehicle ahead by maintaining a set speed.

Based on lane detection by the monocular camera, the LKAS controls the steering to keep the vehicle at the center of the lane. The system operates from 65-100km/h and serves to reduce driver fatigue, mainly during highway driving.

millimeter-wave radar is used to detect the movement of objects at the front of the vehicle.

When a vehicle is stopped or backing up at low speeds below 10km/h, the system will detect obstacles immediately behind the vehicle and suppresses sudden acceleration in the case the driver steps on the accelerator pedal.

The millimeter wave radar detects when the car directly in front starts up from standstill traffic, and the system will give audio alerts and visual notifications to the driver if the accelerator pedal has not been depressed.

The monocular camera recognizes traffic signs and displays the images on the display screen to prevent the driver from missing road traffic signs.

When a vehicle is driven in dark road conditions such as during nighttime with the high beams turned on, the monocular camera detects the driving situation in front of the vehicle, automatically switching the headlights to low beams when vehicles in front or oncoming vehicles are detected. 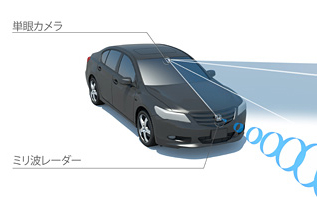 The Honda SENSING system consists of 2 types of sensors with different characteristics, the millimeter-wave radar mounted inside the front grille and the monocular camera mounted inside the vehicle on the upper part of the front windshield. The millimeter-wave radar with improved performance extends the system’s sensing capability to not only an object’s position and speed but also to pedestrians which are difficult to detect because of their low radio wave reflectivity. Furthermore, the monocular camera has highly accurate recognition capability, detecting pedestrians and objects, their attributes and shapes within approximately 60 meters of the front of a vehicle.

The millimeter-wave radar by Bosch is a 76-77GHz radar, consisting of 2 circuits boards, an antenna, a control board, and the power supply board. The Bosch radar is a bi-static multimodal radar with four independent receiving channels and digital beam forming (DBF). These technologies allow the millimeter-wave radar to be configured with independent antennas for different directions, which improves the angular measurement accuracy and allows the radar’s field of view to be adjusted depending on the situation. 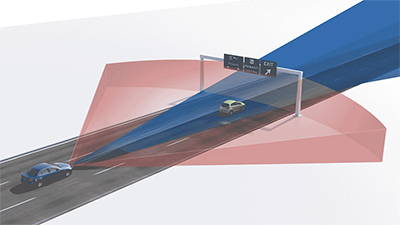 By focusing the main antenna to create a focused beam pattern with an opening angle of ± 6 degrees, the system is capable of reacting to vehicles in front at long range (up to 160 meters) and performs exceptionally well at higher speeds with minimal interference from traffic in adjacent lanes. With the elevation antenna, the system achieves an opening angle of ± 42 degrees at close range, so that a pedestrian stepping out into the road from behind a parked car, for example, is detected at an early stage.

Further, by using the elevation antenna (the red area in the image), an additional upward elevation beam is generated. This additional upward beam allows the system to accurately identify objects, determining whether a vehicle can pass under an object by measuring the height of all detected objects.

The RF frontend of the antenna consists of Infineon’s two chipset VCO internal transmitter (TX) and receiver (RX). What is special about the IC (RTN7735PL) on the TX side is the reduction of components achieved by the integration of the TX and VCO (Voltage Control Oscillator). It should be noted that the unit adopted for the Toyota C-HR is a TX, RX, and VCO 3-chip configuration from Continental.

The control portion is a 2-chip configuration consisting of the A267BB from STMicroelectronics’ and NXP’s MCU SC667226MMMA.

The Bosch antenna system configuration adopted in the Civic is comprised of a separate control board and power board. The power supply is based on the Bosch PMIC [40203] to generate the internal power supply. In the Continental radar system used on the Toyota C-HR, the configuration is a combination of antenna + control board and the power supply board.
The communications block has two CAN communications systems consisting of the Bosch PMIC [40203] with internal CAN+FlexRay and Infineon’s High-Speed CAN transceiver IC [TLE6251-2G].

Initially Honda used the camera from Nidec Elesys Corp, but with the full model change versions of the 2017 Civic and the N-BOX, the camera system has been sourced from the major automotive supplier Bosch of Germany. Honda is the first Japanese automaker to use Bosch’s monocular camera. 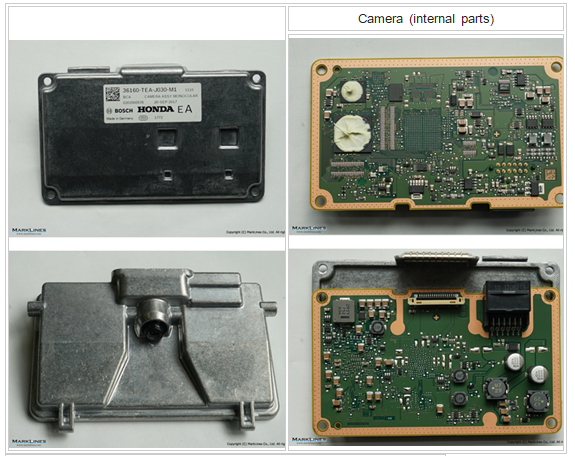 Comparison of ADAS functions between the Civic and C-HR 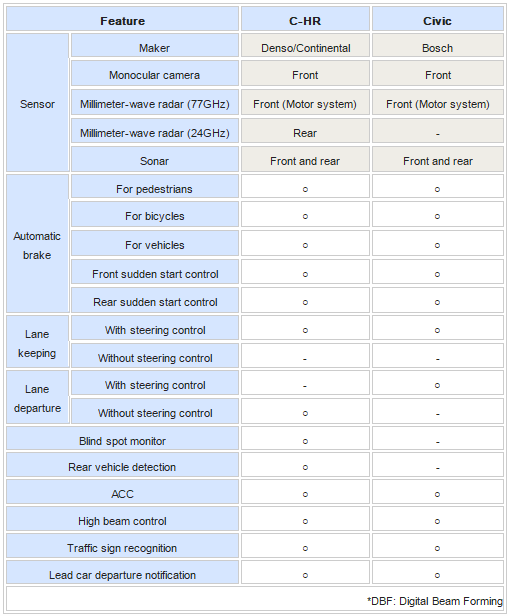 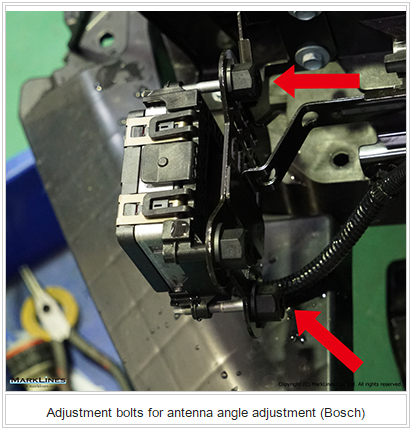 The Civic is not equipped with rear millimeter-wave radar so there is no BSW (Blind Spot Warning, vehicles approaching from the rear) feature. Furthermore, during lane departure events, the Toyota C-HR ADAS does not feature a steering control function, but in the Civic the steering control system will functionally intervene to bring the vehicle back to the center of the lane.

However, in the Toyota Alphard and Vellfire models launched in December 2017, the steering assist function was added for the Lane Departure Alert system. The difference in the millimeter-wave radar hardware antenna adjustment angle is that the hardware of Denso and Continental use motors, but the Bosch system uses two bolts for angle adjustment during installation; based on this, the DBF (digital beam-forming) radar system can digitally control the antenna angle adjustment.

DBF controls the beams of multiple phased array antenna. DBF is a digital signal processing technique used to increase the directivity of signals, processing signals the same direction to create a stronger signal.

Three navigation system options are offered in the current Civic.

In this vehicle teardown analysis, the navigation system installed was the entry model Internavi 7-inch VXM-184Ci from JVC Kenwood. Below are the main functions and specifications of this navigation product.

Functions of the VXM-184Ci Entry Model 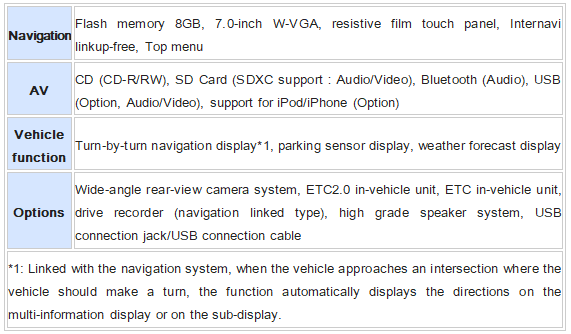 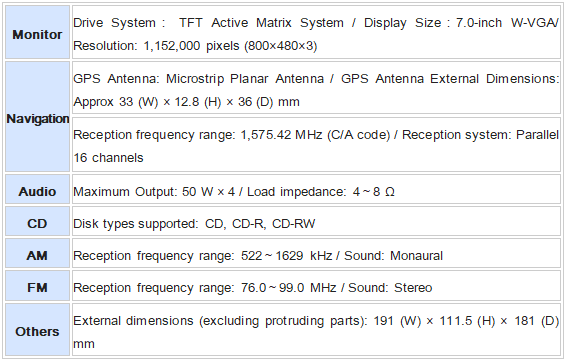 The navigation system lineup of the Civic ranges from the lowest-end entry models to the premium Internavi models. The lowest end model in the Toyota C-HR did not have the connectivity function (T-Connect), but Toyota announced that from June 2018 all grades will be equipped with a Data Communications Module (DCM) as standard equipment. In the Honda Internavi premium version, the following information is provided through the dedicated communications device.

The functional blocks of the JVC Kenwood entry model navigation system are shown below. 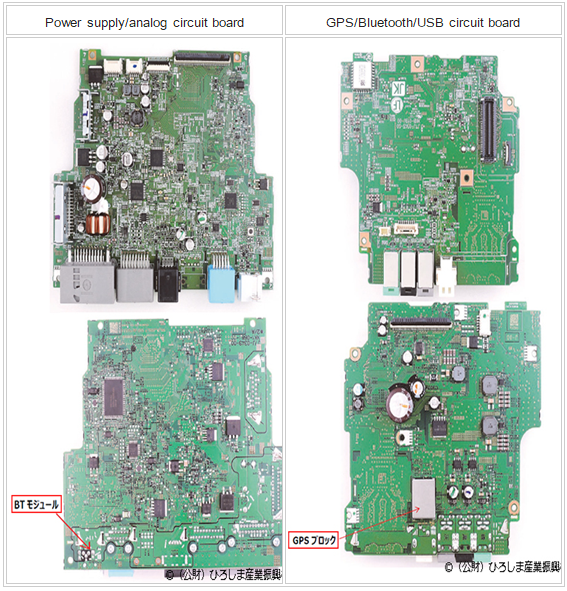